Back at home and there are gaps on our training schedule. I don’t like gaps. Having gaps makes me feel unprepared and being unprepared gives my ‘I can’t do this’ voice an excuse to shout louder. I decided I would go for another run this morning and clear one of the gaps. Kath said she’d help me get my butt out this morning and she did gently nudge me out the door.

Kath showed me how to use her Garmin  – she’d programmed it so all I had to do was hit start when I set off and then save the data after my run. I needed to do 45 minutes and decided to do the 45 minute loop from home, past our sheep fields, down the golf course and along the canal. I wanted to run with the Garmin just in case I need to run the half marathon next weekend on my own (looks likely) where I will need to  run intervals and I was also vaguely intrigued how much slower I was running on my own.

I set off, the first stretch is slightly downhill so I’d planned to keep going for more than the 3 minutes because in an organised race it is usually too chaotic to take the first walk break without really pissing people around you off! Howver, I hadn’t tied my pants tight enough and my belly was in danger of escaping so that needed sorting. I took the first walk break. Then I kept going and felt ok really. I was a bit puffed as I got to the sheep which is roughly a mile and decided to take the walk break there. I then managed the slope up to the little wood before the golf course and then made my way down the golf course carefully. I still don’t like downhill and there were a few golfers around on the path blocking the route I would normally take. It was spectacular though because it was quite a misty morning and I’d set off from home above the mist and ran down into it as I headed down the golf course to the canal.

As I got to the canal bridge I was briefly tempted to turn left and just do a short run – but I’d committed to 45 minutes so I turned right. Shortly after that I passed a guy on a canal boat going in the opposite direction who shouted ‘Bloody hell lass, well done!’ and waved. I waved back and kept going. I was just wondering about taking the next walk break when another runner coming the other way said hi and smiled without any hint of sarcasm or ridicule. I could have hugged him (but he was long gone!). I kept plodding along forcing myself not to look at the watch. I ran to the next bridge and turned round. I met another runner who also said a cheerful hello and also didn’t seem to think I shouldn’t be doing this. So onwards. When I got back to the bridge where I had first crossed the canal  I met the first runner I’d seen again. We were now both sweatier and a bit more puffed than we had been first time we’d passed. We both managed a smile and a thumbs up. Thank you whoever you are – I hope my little nod and thumbs up helped you as much as yours did me!

Then I passed the canal boat again and as I drew parallel I called out ‘any chance of a lift?’ The bloke laughed and said ‘You’re doing well aren’t you – I’m doing 3 miles an hour on this what are you – about 6?’ I just waved and then he was behind me. Then I passed a cyclist who said hello as he whizzed past and then a runner who looked utterly miserable. He had his earphones in and a look of intense concentration on his face. He was motoring but he just seemed so unhappy. He didn’t acknowledge me inspite of my smile and ‘hello’. ‘Sod him’ I thought as the bridge that I thought would be my finish line came into view. Nearly there! I glanced at the watch as I got to the bridge thinking that surely the beeps for the last 30 seconds must be imminent. No, there were still just over 2 minutes left. I kept going. I found the next 20 seconds or so really really hard  – probably because I had presumed I would be stopping at the bridge. I kept going though. There was a bloke walking a little dog a little way ahead of me. He was walking fast but I was determined to catch up with him. I did and made some comment about him walking faster than I was running which made him laugh. I just got past him and then it was over. I felt pretty good, I saw people on my run, I interacted with people and everybody I met didn’t seem to think that me running was utterly ridiculous!

I just hit save on the watch without really looking but I knew I’d come quite far. Once at home I got Kath to show me how to check the data (well actually she did it for me!) and it turns out my average pace was 11.28 minutes per mile. I was surprised at that. I was fairly sure that I must be plodding along far more slowly than if I was running with Kath and really I was just hoping it wasn’t too much over 13 minutes…

I phoned Kath to tell her I was done and starting to walk back home and she promised me pancakes when I got back (they were really yummy!). The problem with living up a hill is that after a run, to get home I have to get up this (well I could walk along way round to avoid it but that’s also up hill, just not as steep): 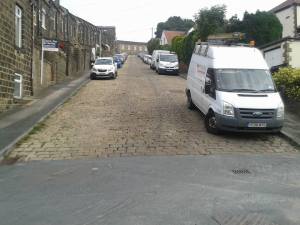 And annoyingly it doesn’t look that bad on the photo but it is, it is really steep. I do wonder whether one day maybe I’ll be able to run it. For now though I’ll aim for a 3 miler tomorrow and then all my gaps are gone and I am back to 45 minutes Tuesday, 45 minutes Thursday, a 4 mile walk on Saturday and the half marathon on Sunday

Oh and it is Sunday so weigh-in time. I’ve lost about half a pound which given my 3 meals out and 2 bottles of wine this week is pretty good going!.