I have run 500 miles in 2017 (Go on, who is singing the song in your head? All together now: I would walk 500 miles…). I left it to the last minute but 500 miles it is. I am really pleased with that and a little bit proud. 500 miles is a long way. Some of those miles were bloody horrible. They really were but sitting here reflecting on a year of running I don’t really seem to remember those.

Here are the memories that I do cherish from one hell of rollercoaster ride: 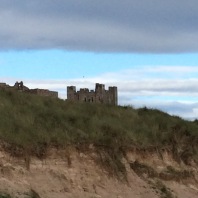 I have loved seeing the seasons change on the loops I run from home, how things look different at different times of the year or even just different times of the day in different light and depending on which way round I’m running the loop. I’ve enjoyed running away from home in places as varied as Seahouses, The Lake District,  Mexico City and Disney World. I’ve loved how running makes you see even familiar places in a slightly different way and how it lets you explore unfamiliar ones. Some of these runs were hard, really hard and included meltdowns but I wouldn’t change a thing. They are now part of my story and part of an awesome running year. 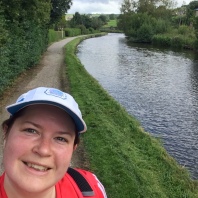 Discovering I’m even more stubborn than I thought (hard to believe, I know)

On several occasions this year I have tried something new – a new trail, a distance I haven’t done for a while, a new surface (think beach), a ridiculous hill… and failed. I

have abandoned several runs because I just couldn’t find the mental strength to push through and on each of those occasions I have gone back out, later that day or the next, and I have done it. I have run each and every one of those routes and every time I found something I didn’t know I had, gritted my teeth and kept putting one foot in front of the other. Towards the end of the year I have found some of that determination or stubbornness without having to give up and later go back out. I’m getting mentally tougher.

I have been so lucky with wildlife sightings this year. It’s quite staggering to think that I have regularly seen kingfishers; that the flash blue and orange is now almost familiar –

awesome but familiar. Herons continue to be my good omen bird. They’re so majestic and calm and quiet and somehow they install a sense of quiet confidence in me whenever I see one. There have been regular sightings of smaller birds including dippers, wrens, sparrows, robins, all manner of tits, wagtails… and several sightings of woodpeckers and kestrels. I’ve seen deer, rabbits, a mink, hedgehogs, squirrels and a rat or two. The ducks, geese and swans along the canal have been my cheer squad and several times now we’ve seen red kites at Bolton Abbey (as well as at Bramham Park during Endure24). We also saw some very serious road runners and cyclists and decided they’re funny creatures.

camaraderie and our team  – the running was secondary. I didn’t really enjoy the Lakeland Trails Helvellyn event for the running but I enjoyed having completed it and it once again showed me that the impossible is possible. Kath and I learned a lot about each other that day and we’ve changed how we run as a result. It was worth it for that alone.

I don’t like people generally. So to have a section of this post about the people is slightly odd. However, there are a few who have contributed significantly to me running at all and running 500 miles this year. First, there’s Kath of course. I remain slightly bemused (but very grateful) that she has so far resisted what must be a near overwhelming urge to push me in the canal (or the Wharfe or any other waterway). I wouldn’t be running if it wasn’t for her. Then there are those of my friends, not all runners, who humour me by listening to my running stories, who ‘like’ my posts, who are more supportive than I suspect they realise. I’m looking at you here Bex, Kat, Tammy, Donna, Jenny, Robin, Heather, Sammie, Jo (and others I will have forgotten – sorry). I’m sure having a gym buddy in Nick made me go to the gym and stretch (even if not much else) just enough to avoid serious injury and my online running club continues to provide advice and

support specific to running as a fat lass at the back. What has surprised me though is how much difference the support of the other Facebook group I joined made. The Trail Running Magazine’s Run1000Miles group has been epic. I thought I’d feel like an outsider at best. I thought I’d be intimidated and daunted but the opposite is true. Seeing the inspiring posts, amazing photos, staggering achievements and the support, advice, encouragement and trail running love in the group made me see running and runners in a whole new way. Without that group I wouldn’t have run 500 miles. I am excited to share their adventures and share mine with them in 2018.