Well Dopey 2019 is underway. It’s 5k day. I meant to blog last night to tell you about travel and expo etc but I was too tired! So today you’ll get two posts. Let’s start with getting here. We actually set off on Monday afternoon and drove to Manchester airport. We’d booked an airport hotel just in case the weather was going to be bad. As it turned out we didn’t really need it but it was still nice to get our Disney World adventure started. We had an early dinner in the hotel, watched TV for a while and then got an early night. 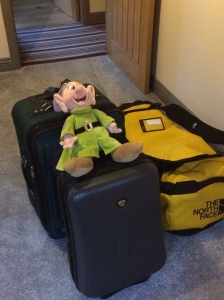 In the morning we had a cuppa in bed and an apple, showered and wandered down to check out of the hotel and into our flight. Everything went smoothly and even security was pretty fast- unusual for Manchester. Then we sat in the lounge and had breakfast. Eventually it was time to board and we got settled in. Then we sat on the tarmac for ages because there was in issue with one of the luggage containers. We finally took off an hour later than we were scheduled to. Otherwise the flight was fine. We watched Deadpool 2 and a little while later we watched Christopher Robin. Then I listened to music for a bit but eventually got bored and we watched Solo. Then there was just an hour to go. Just after we landed we saw a heron as we were taxiing to the terminal building. Herons are my good omen birds, they are majestic. This trip is going to be fabulous! Immigration was fast but luggage took ages to come and then there was a little wait for the Magic Express to take us to the Contemporary Resort. We were also the last drop off. So by the time we got here it was 6.30pm or 11.30 pm at home- way past our bed time. 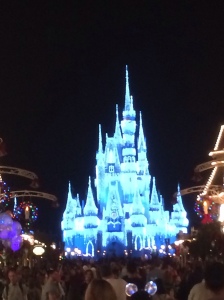 Tired as we were, we still had a little walk over to the Magic Kingdom. How could we not. I was excited to see the Christmas decorations still up. I had expected them to be gone. We walked up Main Street USA to the castle and back through the shops. It’s funny how a place can be so so far from home and yet so utterly familiar. I always find it overwhelming. I don’t understand why I like it, I shouldn’t. This icon of corporate America should not work on me. But it does. It makes me happy in a way that is impossible to describe. It makes the Magic of life tangible, it makes dreams come true and it makes me cry happy tears every time. This time was no different.

Then I unpacked, we had a bit of food and then we crashed into bed and I was out like a light. I woke at 1am and didn’t think I’d get back to sleep but then it was suddenly 3.30 and after dozing a little while we decided there was not point pretending that we weren’t wide awake. I made coffee and we sat in bed talking, reading and catching up on social media etc. I suddenly felt a bit anxious about the Expo, a bit daunted by what was to come but also excited. I finished unpacking and we began to sort what we would need for the day. At 6am we went downstairs to the Contempo Cafe where Kath got a snack of 2 boiled eggs (I took a porridge bar with me) and we filled our Resort mugs with hot drinks and had a mini breakfast watching the world go by. After that we walked the Contemporary Resort running track, saw another heron and got ready for a proper breakfast at Chef Mickey’s shortly before 8am. After filling our tummies and saying hi to Mickey and friends (again, why do I have fun here? It’s utterly ridiculous) we headed for the bus to take us to the Expo at ESPN Wide World of sports. 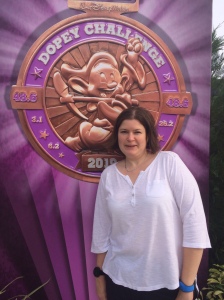 There are always horror stories about long queues and merchandise being sold out etc but that is just not our experience. If you want to learn how to do a huge event, ask these guys. As we got off the coach we could already hear an announcer giving out info about where to find various aspects of the Expo. Signs were everywhere and clear so we quickly found the arena in which to pick up our bib pick up area and didn’t need to queue to get ours. Kath nearly ended up with the wrong half and full marathon one though, luckily she checked just as we were walking away. You have to have your picture taken with one bib to avoid cheating so they can check that you really are running all 4 races I suppose. Then we picked up our shirts, all 6 of them. Again it was clear where we needed to go and it wasn’t far for us Dopeys. In fact ours was in the same area, I think all others had to go to a different building. Somehow though even these simple directions appear to be rocket science for some. We kept tripping over lost looking people who needed to be pointed in the right direction by volunteers. We tried our shirts on while we waited in line for a Dopey picture. The sizing is odd. None of the shirts are the same size and the 5k t-shirt is way bigger than the long sleeved Tees for the others but of course they only swap them in batches. I was happy to keep mine but the men’s small was too big on Kath and there was no extra small available so she swapped for a woman’s cut. 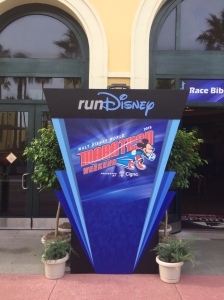 Once sorted we headed to the exhibitors bit, walked through, looked at a couple of things but didn’t see any good gloves, no soft bottles at all and race number magnets that were really expensive. So we didn’t spend anything there but I was impressed with the space again. It was busy but the booths had all been given space and the paths between exhibitor stands were wide enough to accommodate people. Impressive!

Next we left the second arena and entered another – this one to pick up our pre-order commemorative things, check in for race retreat and look at runDisney merchandise. This was a bit frustrating because nobody could tell us where we could check in for race retreat but once checked in we would get priority access to the merchandise area. Eventually someone let us in and pointed us vaguely in the right direction. This was the closest we came to a sense of humour failure but we were soon back laughing at people getting all stressed about getting absolutely all merchandise for their race distance. We looked at the runDinsey stuff. In the end we each bought a vest and I bought a jacket. There were some nice t-shirts too and mugs and wine glasses and all sorts of stuff but I really do not need more stuff. We found the pre-order pick up, got our things – silly things that will hopefully make us laugh as well as remember our achievements in the future- and then finally found someone who could point us to the race retreat check in. We got that sorted and then headed back to the bus. 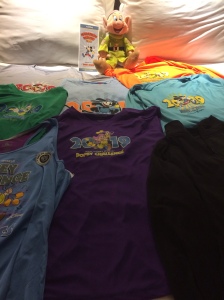 I had honestly expected it to be much more frustrating and for it to take longer. On the bus back I reflected on the task ahead. I’m not sure my brain has registered exactly what it is we are doing this week. I was getting excited but I was also not really allowing myself to think about the marathon. We will see how this mental game plays out. Once we dumped our things we decided to have lunch at the Wave in our hotel, one of my favourite Disney restaurants and one of the few you can get a table without booking in advance. We didn’t want to risk getting grumpy because we were hungry. After amazing crab cakes and a beef and onion roll we were ready for some theme park adventures and headed to Epcot. We stayed in Future World leaving the World Showcase for another day. Some of my favourite rides/attractions are here, Figment, Soarin’ and the manatees in the big aquarium. Then we had dinner in the Coral Reef restaurant and had an amazing table right by the fish tank. We weren’t far off falling asleep in our non alcoholic cocktails though! 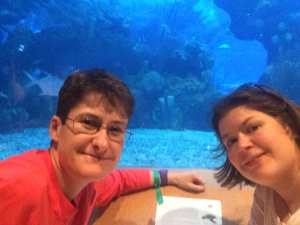 We were in bed by 8pm ready for Dopey Day 1. 20000 steps for a Disney Day was taking it very easy indeed and it was lovely to do some of our favourite things without any pressure to do everything because we have a full week after Dopey to enjoy the parks. I even got to sit in the warm sun for bit while Kath did Mission Space. It was a really good day and even with the crowds my anxiety levels stayed low. I was excited to get Dopey started!