Last week I was lucky enough to attend a conference in Mexico City. I took my running

gear – as I often do when I go away for work. More often than not the running gear stays in my bag but not this time. I arrived Monday evening and after a pretty good sleep hit the gym on Tuesday early morning. I got on the treadmill, saw that I could have a 5k trail on my screen and settled in for a very very slow 5k. I thought it would be nice to stretch my legs but was aware of being slightly tired and it being warm – even in the gym. So off I set, aiming for a pace of about 13 to 13 and a half minutes per mile. It felt like hell. I couldn’t breathe, sweat was pouring off me and I was nowhere near the pace. I was at about 14 and a half. I walked a little bit and tried again. At 1.2 miles I gave up and did 5k on the bike instead, slowly and grumpily. It began to dawn on me, altitude. That’s why I couldn’t breathe. I know Mexico City isn’t THAT high but it is still noticeable.

I didn’t really notice altitude generally although I’d been slightly dizzy when I first arrived  but I put that down to tiredness. I also noticed that I was out of breath more quickly going up stairs or walking fast. Anyway, Wednesday morning I tried again – armed with a little more knowledge and understanding of why I found it so hard. I did a little better. I went slow and plodded my way to 2.2 miles. I was going to try for the 5km again but my knee started to niggle a little and then the treadmill programme stopped at 30 minutes with a 5 minute cool down and I didn’t bother re-setting. Instead I switched to the cross-trainer and did another 30 minutes on that. I was a sweaty mess. In the afternoon I went for a long walk and didn’t notice the altitude – I noticed pollution and heat. 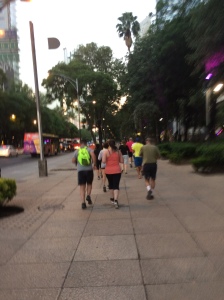 Thursday I had a rest day but I did walk a fair bit too. Friday morning was the biggy. The conference fun run. A 5km, non timed early morning run. Secretly I’ve always wondered what it would be like to run one of these conference runs. I’ve never even considered joining them. I don’t know what possessed me to do it this time. I’d agonised over it but all my Facebook support groups were very much of the opinion that I should go. So on Friday morning I pulled on my 2016 London Marathon Finisher’s T-shirt – as if it somehow gave me the right to be there – pulled my pants and trainers on and headed to the lobby. There were two people there already, disappointingly they looked like runners. Such a silly thing to say but as I stepped out of the lift I thought ‘Fuck, proper runners’.  Soon we were joined by a few more people – a serious half marathoner, an ultra marathoner, other experienced and speedy looking people- but it stayed a small group. Great. I desperately wanted the ‘Fat Lass at the Back’ gear because that was really the only way to describe the scenario – everyone was thinner and faster. I nearly made my excuses. But I was already up and dressed for a run, I might was well set off with everyone and go for a run anyway. I chatted with a couple of people – fairly serious runners all round really – there was talk of taking it easy at around 30 minute pace. Yeah right, I nearly (but not quite) ran a sub 30 minute 5k once at the height of Dopey training and that nearly killed me.

So we set off. It was clear immediately that the pace was too fast for me. After an initial 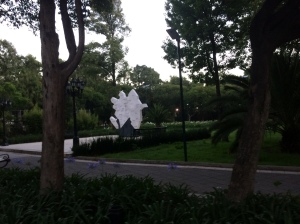 pang of disappointment and feeling crapy about it, I was actually ok with that. I dropped back and settled into my own pace and watched, vaguely amused, as the rest of the pack disappeared off into the distance. I nearly caught them a couple of times as they’d stopped for traffic lights but they were soon off again. After a little while I noticed that one of the couples had dropped back a bit from the main group and the woman was walking a bit on and off. Eventually I caught up with her and asked her how she was doing. I vaguely thought about pushing past her – maybe I could run the 5km at my pace without walking – but that didn’t seem right and anyway, I wouldn’t mind a little walk. Well, it turns out that she too was struggling with the pace and that she was from West Yorkshire too. We run/walked and chatted our way round the rest of the course with her partner running ahead and waiting on and off – and I really enjoyed it. The rest of the group waited at the entrance to the park but that was really the last time we saw them. By the time we got to the hotel they’d all disappeared.

So, the fun run. My thoughts. In so many ways it was exactly the way I imagined it and why I have never ever joined before – and probably won’t again. The pace is too fast, the people are all ‘yeah we’ll take it really slow, it’s just fun’ when they actually don’t mean that. They also don’t mean that they’ll stick with the slowest person. They wouldn’t have had one or two people drop back to run with me. The only reason I wasn’t on my own was because Jenny was happy to put up with me when I caught up with her. It was too small a group to really split into sub-groups so having a faster and a slower pack just

wouldn’t work. I enjoyed the run. I also would have enjoyed it had I done it on my own – but I was ready for that and resigned to it. However, I’m a long way along my running journey now and I’ve accepted that I am slow and will often be at the back. I am generally ok with that and I still found it incredibly hard to not get disheartened as everyone jogged off away from me. It took a few deep breaths and I swallowed some tears and reminded myself that this was my run and they didn’t matter. Once I got that in my head it was fine but that’s not that easy a place to get to. All the things I had always feared about conference fun runs came true: everyone was thinner, everyone was sporty, everyone was faster, nobody waited…

So why did I go. Well I always presumed that runners would laugh at me and be dismissive – but I have had so much support from the Too Fat to Run? community and Clubhouse lovelies there that I do now firmly believe that my substantially sized arse has a right to be out there doing its thing. More importantly though, I have also got amazing support and encouragement from another FB group – the Trail Running Magazine’s Run1000 miles Challenge. There are some amazing, inspirational and phenomenal runners in that group and they don’t seem to care that I am fat and slow. They cheer my achievements and celebrate my successes with me, however small and they made me re-think my perception of runners. They’re not laughing. They’re telling me to go out there and do it. They’re lovely. Somehow I had started to think that most runners are lovely and  that my fear of conference fun runs is mostly based on my own prejudice of runners. So I went. I think maybe I was a little disappointed at the end of the run. I’m not really sure what I expected – certainly not for everyone to wait until I’d made it back or cheer or tell me how well I’d done (I would have found that patronising and embarrassing) but maybe I did expect someone to be there in the lobby making sure all runners got back safe. Maybe I did expect one or two to say ‘hi, how was that? Bit warm out there isn’t it?’ Maybe I expected to be able to say ‘Wow, you must have sped up a fair bit that last mile, I couldn’t even see you’. Instead, I said bye to my  two new friends and went for a shower and then some breakfast.

One thought on “Mexico Running”