Today I was working in a cafe about 3 miles away from home. My initial plan was to walk but then I thought I might as well run. I didn’t want to overdo it as we’re supposed to be doing a longer run tomorrow and I ran Monday and Tuesday as well so I thought just a steady run there and then a run/walk back or perhaps the bus back. I haven’t run with a back pack for ages and ages and I have never run with it with work stuff in like this. But I comfortably fitted my MacBook and some papers together with a jumper, my rain jacket, my wallet, some baby wipes and some deodorant into my little Jack Wolfskin pack (I reviewed it after first buying it here). It felt ok on my back, not too heavy and not bouncing much. I set off and ran down the hill and onto the canal bank. I felt comfortable and kept telling myself to slow down but somehow I never really did slow – I was happily running under 12 minute mile pace. At this rate I was going to be far too early. I’d been expecting to go slow and then slow down even further because of the backpack.

cool down a little and not have to hang around outside the cafe for ages. It was a lovely little run out.

On the way back I was going to run/walk 1 minute 1 minute to take it nice and easy. I walked the uneven bits negotiating the huge puddles and planned to start running when I got to the proper canal towpath. There was a cyclist just in front of me cycling just above my walking pace. He then stopped and adjusted his boot and was then cycling next to me which I found a bit irritating. Just as I started to run he deliberately pulled his bike across the path and blocked my way. I wasn’t too concerned, there were loads of people around but it was irritating. He said ‘You’re going to have to run faster than that’. I said ‘For what?’ He said ‘If you want to lose weight, you’ll have to run faster’. This really pissed me off but I just smiled and said ‘Really? Cool. I’ve got a pen and paper here somewhere, could you write down the references to the research explaining how that works, I’d love to check that out.’ He shrugged and said ‘Well it’s obvious innit’. I said ‘Well you’re obviously the expert so if you could just point me to the sports science journals I should be looking at, that would be awesome’. His response: ‘Don’t give me that brainy shit’. I took a step forward and he moved his front wheel enough to let me through so I left him with ‘Given that you’re the one cycling at my walking pace, I don’t think it’s me who has an issue with speed’. I forgot the run/walk and kept running because I didn’t really fancy continuing that conversation. I ran until I hit a mile, then I walked a little while and then ran the last bit along the flat before walking up the hill home (where I saw the gorgeous – if slightly evil looking cat). 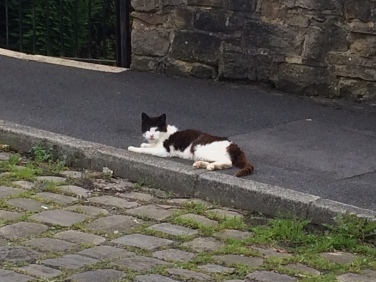 I enjoyed today – both the running and the writing and I’m pleased with how my little back pack worked out. It’s comfortable and crucially doesn’t bounce. I think I shall stick with that for now. I have a hydration pack for it and I think it will be ok for the really long distances in the future. I’m not going to need it for that for a while – the little bottles we bought recently and new Alpkit pants with pockets on the legs will do for anything I’m attempting at the mo. Hm. I seem to have mentioned various pieces of kit and shoes etc recently – it may be time to do some review posts. I’ll get to that over the next week or so.

One thought on “A sort of commute run”