I may have got a little over excited about my monorail highlighters on my birthday. So over excited in fact that I forgot to mention that Kath was also buying me a new running watch. We chose it together on my birthday for delivery the next day. I didn’t look at many because Kath has a Garmin Forerunner 235 and I like it. I borrowed it for a run/walk the other day just to be sure but basically I knew that that was the one I wanted. 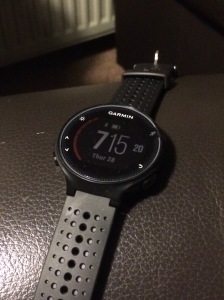 have to find a child to do it for me). It does everything I want it to and more. It also does some things I really don’t want it to. I will see how I go but I suspect the function that tells me to move if I am sitting still for too long will have to be turned off and I’m really not sure I’m made for smart notifications. I don’t think I need my watch to tell me when my phone’s ringing. Old school, I know. I’ll do a proper review when I’ve taken it out a few times but for now I absolutely love it. It’s nice and light so I forget it’s there and it works well as a watch as well as general activity/step tracker and then the running watch. In terms of the running watch, my favourite feature is the run/walk alert features that means I don’t have to programme or set intervals for a run. I can just set the alerts and programme the run time or distance or whatever or not programme it at all and just set it to go when I set off. The beeps are loud enough to hear without being intrusive but there is also a slight vibration which is great because I can imagine that there are situations where you don’t hear the beeps.

Also for my birthday I got a new yoga mat. I needed one. My old one was baby pink, full of holes where cats have stretched with their claws out, and it may have survived a lamb incident or two earlier this year. It was in a state. The new one is pretty. It’s much thinner that the one I had before so I wondered how my knees would do. It feels great though – supporting, non-slip but more stable and easier to balance on than the one I had before. Again, full review to follow when I’ve used it a bit more. It’s a Bionix Professional Support one. I can’t find a link to a site that isn’t just a selling site so no link for now.

Today we went into Leeds. It wasn’t as bad as that sounds. We went early enough for it to still feel relatively calm when we got there. After breakfast (Weatherspoons Bagel – yummy) and a close encounter with a former student (ribs still slightly sore from the unexpected hug) we headed for Up & Running. We were heading for a gait analysis. Yep, finally I had decided to be brave enough. I made Kath go first and she is completely neutral in her running. She just runs on her toes quite a bit. So that was her done and off looking at the gorgeous trainers all around us. My turn. It was fine. I ran maybe a little slower than I would usually but then I always do on a treadmill. Hate treadmill running. Hates it! The first neutral shoe showed a slight overpronation on my right. We tried a different neutral show that supposedly offered more support but that didn’t seem to work for me – it was worse. Then we tried some more supportive ones and went for a few pairs some of which made it worse, others worked but then were wrong for my foot shape. Eventually we tried a pair of men’s Brooks Adrenaline and they felt really nice as soon as I put them on and seemed to work for the running too. I quite like the idea that the shoes are expecting me to take them on adventures – I just hope they’re not expecting too much. I also like the idea of ‘Run Happy’. They were in the sale. Sold.

really where I do most of my miles, (although a lot of the canal towpath would be fine with road shoes) we asked to see what trail shoes they had in our sizes in the sale. They had a pair of Hoka Speedgoat and something else I now can’t remember in my size. I tried them both but the Speedgoat felt comfy – a bit weird – but comfy. So at 30% off I thought ‘what the hell’. Kath bought some Hoka Vanquish 3s for the road which she is now wearing sitting on the sofa  – not sure if it’s love or she just can’t be bothered to move. She also bought some trail shoes – they were definitely love at first wear: Saucony Peregrine. We’ve been for a little run and I think Kath thinks they’re magic go faster shoes because she left me plodding along at my run/walk to put down a fairly blistering (for us anyway) 9 minute something mile. I wore my new Hokas – see mud on them and everything – and I think

they’ll be great. I didn’t tie them tight enough at the beginning and realised about a mile in that I was moving around in the shoe too much and it was making my feet hurt a bit. I re-tied them and did them too tight so then my feet were in agony. I did my first hill repeat and then stopped to re-do the laces again. I seemed to get it pretty much right then because the pain eased and I managed the remaining 4 hill repeats (the heart rate data is interesting!) and then run/walked the rest of the 4.8 mile loop with Kath who had just finished her hill sprints when I arrived at the hill – she did another 4 with me… There’s always one!