Tomorrow is the next ‘race’ on our calendar. It would be nice to finish this one! We are having our second attempt at a Lakeland Trails event. The first one back in October didn’t really quite go to plan. So I have scaled down ambition and expectation for this one at Hawkshead and been rather more realistic – I’m doing the 10km rather than the longer 17km distance. I’m looking forward to it. I had a bit of a wobble the other day when I decided I was just going to pull out rather than make a fool of myself and as I was coming home on the train today I had a few minutes of being absolutely terrified and really not wanting to do it. But now I’m a nice mix of excited, looking forward to it and a little bit scared.

Don’t ask me what I’m scared of, no idea! I know I can do the distance. I can run the distance straight off on the flat and I’m planning on run/walk/run anyway. I’ve  had a number of runs up at the distance, over the distance or close to the distance throughout the end of March and April. The distance is fine. The hills, well the hills are always to be reckoned with – it’s the Lakes. But hills are ok too. I have hills here. I walk. Quite simple really.

The coffin trail might ask a question or two  – near vertical and about a mile long apparently – but I’m not enough of an idiot to try and run it. I’ll be walking, looking around, taking it in and maybe, just maybe, stopping to take a picture or two (and some deep breaths)! Time, well no actually I am not scared about how slow I’ll be and how long it might take. I’ll genuinely happily come last. I’m not concerned because I know people won’t actually be waiting for me to finish so they can pack up because there’s the longer distance still to come. We set off at 11am, the first batch of longer distance runners go at 1pm. I’ll get back to wave off the #Run1000Miles people doing 17k who are coming for our meet up. So the scared bit – it’s minor and it’s a healthy scared; an appreciation that it’s running, it’s trail running, it’s trail running in the Lakes – things can go wrong. 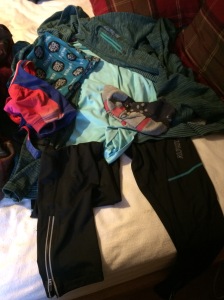 meeting the others won’t be too unpleasant for them. I’ve got my kit sorted with an alternative packed in case the weather hasn’t seen the forecast, I have a choice of 3 pairs of trainers and I can’t decide – it’ll come to me tomorrow. We have some nibbles and plenty of water for the drive up and back. My watch is charged, my phone is charging and I remembered to hunt down the safety pins for our race numbers. Sorted!

I haven’t blogged for a while so there’s lots to catch up on. I have been running quite consistently and I have also been writing – lots. I’ve finished my book (with my wonderful colleague Sanna) and once my brain has recovered from that last effort of pulling it all together I will be really excited about it but to be honest, I haven’t felt much like writing anything else.  So, more to remind myself really but to give you a taste of what posts are to come over the next few days, I need to finish writing these:

One thought on “Hawkshead Prep”