I live in a gorgeous part of the world. Yes, yes, I know, I live in Keighley which doesn’t immediately inspire visions of gorgeousness… but there is loads of amazing countryside on our doorstep and there are some lovely parks around too. I have lived here for quite some time now and the connection with this area is even longer and yet I had never been to Cliffe Castle Park apart from one brief run through it on the Keighley 10k and I have never been to the St Ives Estate in Bingley either – apart from once visiting a client at a care home there. That seems so totally implausible and it’s a bit embarrassing really. But maybe it’s also normal, we never spend enough time exploring what’s right on our doorstep do we. 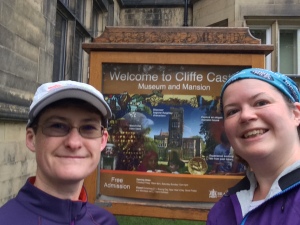 So this weekend I ticked off those two place – now I can at least say that I’ve been and that I am more than just a little bit likely to go again. So let’s start at the beginning. Saturday’s Dopey Plan called for a 5.5 mile walk. We thought we’d jog down to our fairly new local parkrun at Cliffe Castle. I thought it would be just over a mile – it’s actually almost exactly 2 miles. We jogged the first mile or so, then walked the bit cutting through some backstreets where we weren’t too sure about direction. We arrived with about 10 minutes to spare and then my 3rd and Kath’s 4th parkrun were ago. Kath trotted round in a rather impressive 32 minutes something as I plodded my way round slowly. I felt fine and was actually enjoying myself but I didn’t feel strong. The course is nice. It starts off with a down hill on a wide path before turning left onto a gravel path which is quite narrow – no matter for me, I just let everyone go ahead of me on the downhill! It is mostly flat as you come off the gravel path onto a tarmac one and into the wood. Then the climb starts. You turn left and start going up. You just keep going up for quite a while.

It’s a bit narrow and on the first lap I got stuck behind a group of people walking slower than I would normally while the parkrun frontrunners lapped us. While the climb is a bitch, once you’ve done that it’s easy – downhill mostly. On my second lap I tried to power walk the hill too fast and had to stop on the steepest bend to get my breath back, on the third lap I got it right – a fast positive walk at a pace I could sustain all the way and from which I could start running again immediately when I got to the top. As I ran past the house for the final time Kath saw me and came to join me so we ran the last bit together. Just up to the finish is a slope, I wasn’t sure I really wanted to run it but as we headed for it Kath told me I could do it and the music speakers blasted out Born in the USA. I ran. It was a slow 5k but it felt like I was finally getting back to normal. We walked back home and, though tired, I felt good.

Today we were to tackle about 15 miles. I was a little apprehensive but also really

looking forward to a new route and having a little adventure and it was a gorgeous morning. We set off along the canal towards Bingley, we ran down and then dropped into run/walk intervals of 2 minute runs and 30 second walks just before a little footpath that cuts through from Riddlesden to Morton – about half way along that there was a sheep on the path. We had several attempts at letting it come past us but it always changed it mind and kept going forward. It was clearly concerned about getting back to its field though so we hoped that it would go back as soon as as we had reached the end of the footpath where we could get past. It did. Along this stretch we also saw a sweet little black cat and for a brief moment we were running side by side with a sheep and a cat. Then the sheep went back and the cat changed its mind and left us to it. 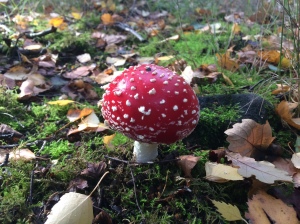 I was tired by the time we got to Bingley. Kath saw a Kingfisher which briefly took my mind off things as I searched for it. As we came off the canal I started to really doubt that I could do the distance and suddenly felt really anxious. I think it was probably the traffic noice and busy-ness that seemed really noticeable after the quiet of the canal towpath. We walked through Bingley and headed into Myrtle Park and followed the path to Beckfoot Lane which is basically where the UP started. It was quite a lot of up after this. A lot of up. Once we got to the top of Beckfoot Lane we crossed over into St Ives Estate for a bit more up. Then we crossed the main drive up into the Estate, climbed a stile into a field and then another into a bigger field and made our way across. It would actually have been quite nice to run this bit – it’s flat. But the fields were full of cows. Gorgeous fluffy black and white cows (Belted Galloways), some were this year’s young I would imagine. It was a little nerve-racking walking through the fields but the cows weren’t interested enough to actually come and have a look, they just stared a bit. At the end of the 3rd large field there was a little metal gate into a wood and more up. The up was taking its toll now and I felt really quite tired, we passed 6 miles.

The route continued through the wooded areas of the Estate, past the Coppice Pond and

eventually (more up) past Lady Blantrye’s Rock and a monument . Then we continue on along the edge of the golf course until we eventually reached Altar Lane. After a brief stop to look at the view we jogged down until we reached the Druid’s Altar turn off, we thought we might as well have a look and the views before heading back down. After that we headed all the way down the lane until we dropped into Bingley again. The traffic noise hit me again and my neck and back pulled tight. I couldn’t shake the tightness and over the next half a mile it gave a horrendous headache. It was definitely the tightness rather then dehydration or anything. It eased every time we walked and I could roll my shoulders or get Kath to rub my upper back. I was really struggling now and at 10 miles could quite happily have just curled up and cried. We carried on the canal and walked a bit to try and settle. At the top of the 5 Rise Locks I managed a few more running intervals but with every step it felt like there was an explosion in my head. In the end we switched the running and walking intervals and I just ran for 30 seconds leaving the 2 minutes to try and relax my shoulders and get rid of enough tension so I could do the next run. We couldn’t just head straight home, we needed more distance so kept going to the next bridge and walked up through our local little wood. I now had nothing at all left. We stopped at one point and I wasn’t sure I could get home. I really thought that trying to do this distance had been a mistake and it was far too much so soon after that cold I’ve had. 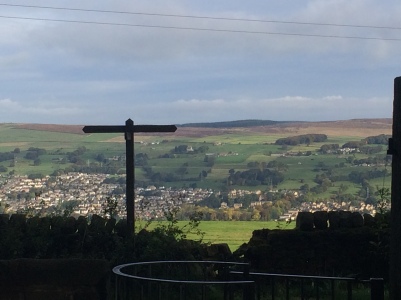 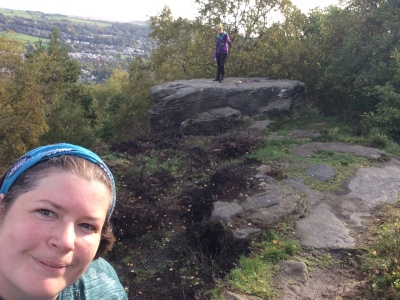 I pulled myself together and managed another little jog and then another before walking the last quarter of a mile home to finish on 14.5 miles. It was slow, so slow and I was initially so disappointed. But now that I’ve been home a while, had a bath, a recovery drink and some food and now that the fire’s lit and I can smell our roast chicken cooking, I feel pretty good about it. I am not broken at all. I am tired, really tired but nothing hurts, no major chafing, and no major muscle soreness or stiffness (yet). I covered the distance this weekend and it feels really good to be back on plan. Recovery so far has been sitting on the sofa with a cuddly cat, writing this blog and watching rubbish TV to just unwind. Dinner won’t be long and then it’s time to curl up with a film and give in to the tired. Yeah I was disappointed but actually, it’s done, it was a lovely route and we had an adventure.

Oh yeah Sunday weigh-in – I jumped on the scales before the run and I’m another pound down.

It’s been a good day and I like this trail shoe selfie! 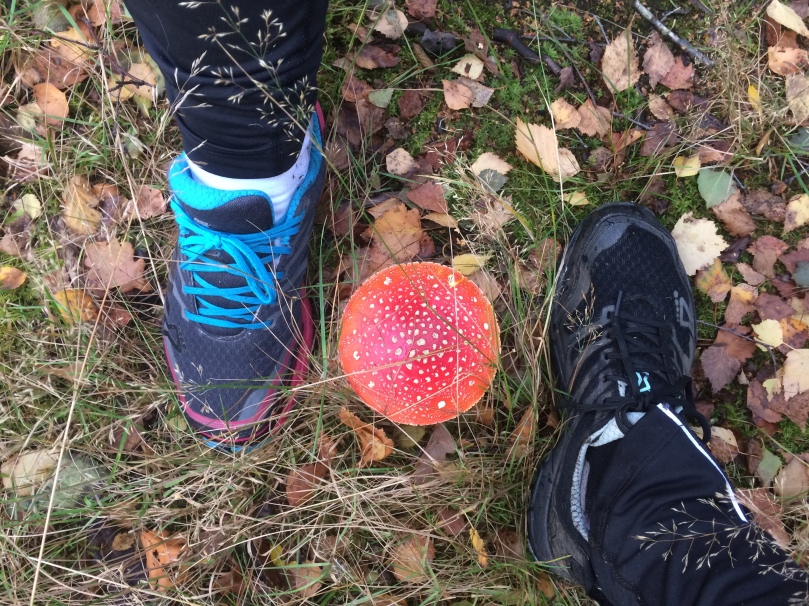