I don’t know where to start with this one. I had a shit day yesterday. No reason, no reason at all but I barely made it off the sofa. I didn’t go out and run because every time I thought about it, I fell asleep instead. Doesn’t matter though, we can move rest days around and run today and Monday instead. So the plan for today was about 6 miles and we thought we might do that at Bolton Abbey. I was quite looking forward to our Bolton Abbey loop – quietly confident that I could make it round without a meltdown. Not sure where that confidence came from given the last run but there it was anyway.

After a loo stop we were about to set off when we noticed that although shooting season has started, the grouse moor which is part of the estate wasn’t actually closed for shooting today. That meant that we could, in theory, head up onto the moor and do part of a 10 mile loop Kath did the other day and which she said was absolutely stunning. Going up to Simon’s Seat was, according to the signs just over 3 miles. Kath told me that the way up was steep in parts and we’d walk a lot of it but that I’d be fine. I am not good at not doing things as planned and doing ‘new’ and ‘different’. So this was a bit of a curveball. I took a deep breath and agreed to try.

We crossed the wooden bridge opposite the pavilion jogged along the riverside for a short stretch and then started our uphill walk. Basically that was pretty much it in terms of running for the way up. There were one or two more little jogs but mostly I walked. After a short stretch on the road we turned right and entered a field. There were a few sheep lazily grazing and paying no attention to us at all. We had another little jog and a hop and a skip through some muddy patches. Then it got steeper and we made our way up a narrow and uneven path. I was ok walking up but really quite worried about how I would get back down.

We had another couple of little jogs through the wood and as we emerged from the wood onto the open moor we were welcomed by stunning views and a lovely warm breeze. As we made our way up the path with one or two short little bursts of running (shuffling?) we saw several grouse scuttle across the path or off into the heather and several sheep who seemed a bit narked that we were disturbing them. Other than that we seemed to have the world to ourselves. There’s a steep bit which felt like it went on forever and ever but eventually we got to the top and managed a little jog and run/walked the undulating section which followed. The last bit up to Simon’s Seat was uneven with boulders and puddles and we just made our way across that, stopped for a few minutes at Simon’s Seat and then made our way back down. Instead of going back the way we came we went the slightly longer but more runnable route towards Lord’s seat.

From Simon’s Seat to Lord’s seat there is a short section on moorland path – bouncy – and then the rest is huge flags. We’d only just got onto the flags when Kath happened on an unsuspecting and rather outraged grouse. It must have been sitting minding it’s own business right on the edge of a flag and as Kath put her foot down she felt it just about get itself out from under her. It made a sort of ‘I’m an outraged grouse and you just stood on me – how dare you’ noise and flew off. Just a few steps later a newt or something similar went through the same experience. I’m not sure if the wildlife or Kath got more of a fright really. Running on the flags was better than I thought it might be. It’s uneven with up and down steps all the way along and it took concentration but it was ok. At the end of that flagged section we were back on the track/path which did have lots of loose stones and gravel but was ok to run on. 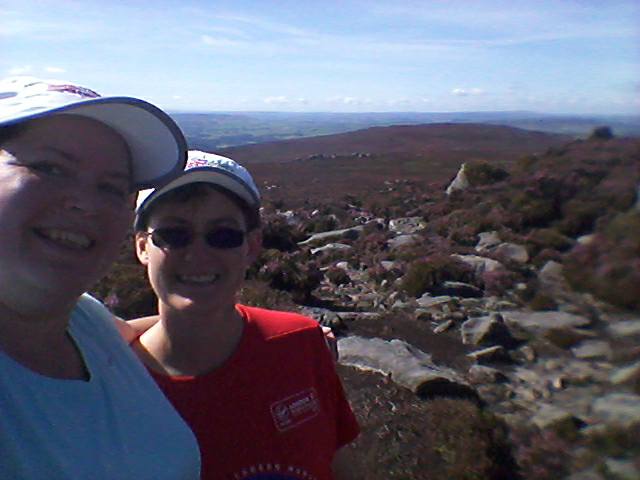 I fell in behind Kath and somehow everything clicked into place. For a little while – maybe half a mile or so, everything felt effortless. I felt completely in the zone and running felt like the most natural and easy thing in the world. I felt like a proper runner. Even when that feeling passed though it was still great. Because I was going downhill it didn’t take too much effort and I could look around and take in the stunning views. 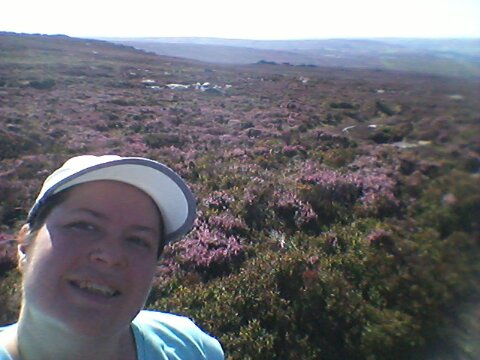 I was dreading the steeper downhill. I am not good at downhill and the sections coming up were steep sections. I resolved to just keep running, no matter how slow. I did keep running, all the way. I tried really hard to trust my shoes and they were fine, they gripped. I slowed and I think I may have been quicker had I walked but I wanted to try and keep running. My quads were protesting a bit about half way down but I did it. We walked up the next little slope and then kept running until we got to the gate back into the wood. We ran most of the stretch through the wood and then ran/walked the narrow and technical bits standing in to let walkers through by a section that had freaked me out because it was muddy, wet, steep and narrow. We seemed to have to wait for ages until they’d all gone through and that gave me far too much time to think about the next sections. The next 100 metres or so were a bit more stressful than they needed to be because I’d over thought it.

Back across the field, now with some cows in that thankfully didn’t seem at all interested in us  and back down the road to the pavilion took us to 7.4 miles. We were even back in time for bacon sarnies and coffee so a good trip out all round. Oh and it’s Sunday so weigh-in day – I have stayed the same.

One thought on “The one where Kath steps on a grouse”