I’m having a rest day today. Kath’s been out for just over 3 miles but I do think I need a bit of a rest. It’s a bank holiday here so I have done bank holiday things – taking time over breakfast, sipping coffee, contemplating life, getting excited about our holiday… that sort of thing. 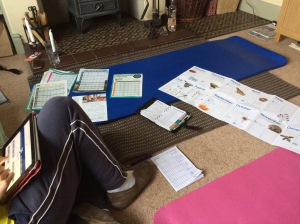 goals and planned races etc. Here I’ll share the next couple of months with you (any further out than that and it’s too liable to change). So for August I have two runs left really – they are the usual 45 minute ‘maintenance’ runs (to use Galloway speak). Hm. They may have to be a bit longer because if I can cover 10.35 miles before Friday I will have covered 90 miles this month. I’d also like to get to 350 year to date miles before we go to Disney which, with another 10 miler planned on Saturday should be in the bag.

Then we go to Disney World for 10 nights and don’t have a plan as such. We’re taking running gear and we want to get out for a few little runs, just a couple of miles round the resort maybe. We’ll see how it goes. The whole point is to have a couple of low mileage weeks seeing as both of us have recorded higher mileage than, possibly, ever before in August. So the plan really kicks off on the day we land: 15th September: 10k easy (it won’t be easy but it will help kick the jetlag into touch). So here’s the plan starting this week. I’ve used the 12 week Too Fat to Run? Clubhouse template.

So Mondays are generally complete rest days and Wednesday is generally strength yoga day and Friday is a general yoga day – plenty to chose from on the Yoga Studio app we have. We do try and do some stretches/yoga after every run as well as some strength exercises most days. Our next races are mid October – the Lakeland Trails Dirty Double (Helvellyn and Ullswater challenges). I was really nervous about these but the last couple of weeks of running have shown that I should be fine. The time is generous and I’m not running them for a PB – just to have fun and hopefully enjoy some spectacular views and/or bracing Lake District weather.

There isn’t anything on this plan I’m worried about. I think the hardest bit might be getting ourselves out for a 10k on the day we get back from Florida. I think we land about 7.30 in the morning so if all goes to plan should be home by 10.30-11am ish depending on how long luggage takes and what the traffic is like. I’m not sure what’s best, short cat nap and then run?

I like that the plan takes into account real life. That we have weekends away which don’t involve running and that that’s fine. I read something the other day (can’t remember where – some online thing) about running completely dominating and everything else having to be organised around that and I don’t think I’d like that. But then I suppose I am more flexible than many in terms of when I can run during the week. Anyway – that’s the plan. As the sayings go, if you don’t plan, you plan to fail and rules are there to be broken so these are our running rules for the next couple of months and they can (and probably will) be broken, moved, stretched and re-written.