I haven’t run all week. I was the queen of excuses. The last run was Sunday and it was miserable. In fact it was barely a run but I guess just getting the first post-holiday run out of the way is a good thing. Then I made excuses all week, partly based on just being a bit busy with a fair amount of travel and long days in the week and just feeling a bit broken. I was going to go to the gym on Tuesday but I felt tired and achey and like any muscle in my body might just snap if I ask anything at all of it. That’s also the reason I didn’t run. I actually took my gym kit to work on Thursday but I never made it across. Friday was, well Friday at the end of a long and busy week and once I got home I didn’t really move off the sofa again.

I get that sometimes you need rest and that a week really isn’t that dramatic even if it comes after 2 weeks holiday but when I don’t run regularly the tiny little bit of confidence I have with this disappears and I start at square 1. So in a week I have managed to convince myself that I cannot run, that a mile is too far, that I should start again with a complete beginners programme or just pack it in completely and that it would probably be a good idea to pull out of the Lakeland Trails challenges coming up in a few weeks. I’m persuasive like that.

I have also been mulling over the numbers on our training plan for this weekend with a mixture of bemusement and terror. 8 miles Saturday, 8 miles Sunday. Perfectly reasonable when you are training for back to back 15/14km runs but not perfectly reasonable when you have convinced yourself that you can’t run to the postbox at the end of your road. I knew I’d either have to do it or make excuses today. So I decided that Kath and I hadn’t really seen each other all week and a slow morning with coffee and breakfast in bed was just what we needed. There we are. Making decisions about running that utterly impossible distance put off!

At lunch time our decorator (he’s awesome, if you ever need one locally, give us a shout) was coming round to have a look at some work we need and once he left I didn’t have any credible excuses left. Now all we needed was a route. I don’t think either of us fancied the canal towpath with the potential for lots of people walking. Instead we decided to go up to Ilkley Moor. Now this might have added to the terror usually but actually, cynically, I just thought it was ok because it meant I could legitimately walk more! I think looking at the profile you can see my justification for walking!

We walked up the hill with a couple of little jogs. Goodness that was hard. I felt fairly miserable and inadequate just walking up! But it’s hard to be too grumpy surrounded by the slightly moody beginnings of Ilkley Moor. There were birds around, all sorts of birds and a fair amount of very suspicious sheep. I couldn’t see any grouse but I could hear their grumbles in the distance and it made me laugh. Once on the path on the moor we set off running. The path is made up of big stone flags through the bog. I loved running that stretch. I had to concentrate on where I was putting my feet but it felt sort of methodical and purposeful and not too hard (I was running at a pace that was easy for me physically because I had to concentrate on placing my feet). Right up on the moor the grouse grumbles were louder and more plentiful and I couldn’t help but giggle to myself and try and look for the owners of those voices. I couldn’t take my eyes off the path for long though so I only saw one or two coming in to land. I really enjoyed miles 3 and 4 and the first bit of mile 5. Then we started going downhill. At just before 4 miles Kath had asked me whether we should do the loop or turn back and retrace our steps to do an out and back 8 miles. I should have said turn back!

The first bit of downhill was ok and I found my rhythm and kept moving. Then it got steep, very steep and there were steps of sorts but as regular readers will know, I am terrified of downhill. I had a couple of moments where I nearly froze and felt like I couldn’t move but move I did and eventually, somehow, we reached the bottom. I didn’t hear any grouse but maybe that’s because I was whimpering more loudly than they were grumbling. I’d tensed everything up and could feel niggles setting in everywhere: knees, ankles, feet, shoulders, hips… we walked a bit more and then tried a few little runs but I was struggling  – more mentally than physically. We picked up the road back up from Ilkley for a very short stretch and then we could have kept going on that or take the footpath straight up the hill which is shorter but steeper. I suggested the footpath because I wanted to keep practising and keep being positive and pushing myself. About half way up I wished I hadn’t. I felt a bit sick and my hips were screaming at me to stop. The top came eventually after a few stops to admire the view and fight back the tears. There were grouse, I could hear them again.

We walked the rest of the track/road, came through the gate marking the start (or rather end, for us) of Ilkley Moor proper as two women were trying to retrieve their dog from somewhere it shouldn’t have been in the first place with very limited success. We started jogging down towards home grumbling about people not keeping their dogs under control. I was pleasantly surprised I could still run (although whether it was actually recognisable as ‘running’, I have no idea). Just as I thought I might have to ask for a walk in spite of actually being on a downhill section, we saw them: 2 grouse on the wall – male and female I think and they were more interested in each other than us so Kath managed to get a picture. They gave me a little boost to run a bit more. 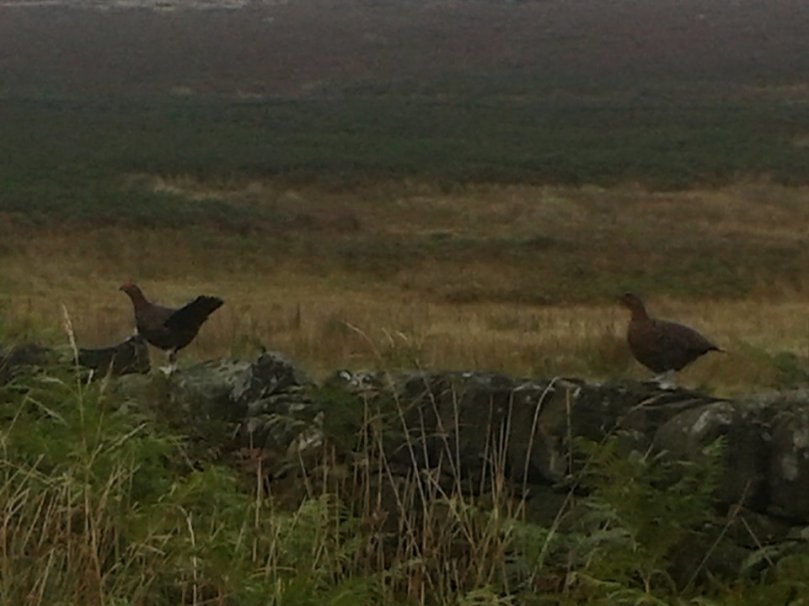 We had a little walk just over half way down to have a sip of water and then again to walk up the little hill. I was struggling to get going again. I didn’t want to run but I wanted to be home so I just kept counting to 8 over and over again and tried not to think at all, just count, just focus on the repetitive footfall and numbers. I got home. 9.2 miles of mixed emotions, of loving and hating running, of thinking I can do anything to allowing some self doubt back in.

I have had some food and a bath and I’ve stretched a little (more later) and on reflection, it was a good run.  I can feel it, I worked hard, I may ache tomorrow but I am not as broken as I felt when we first got home. Lots to learn from, lots of positives and stunning views and most of all I remember the sound of the grouse who cheered us on in their grumbly sort of way all the way round. They sort of sound like they are enjoying grumpily and grudgingly telling a story to someone who is a bit short of time. I love that noise and I love that I can enjoy it minutes from our home.