Kath had a day off today so after spending some time sorting the most urgent emails and planning my conference paper for our Toronto trip we headed over to Bolton Abbey. We were planning to run from there to Burnsall and back – roughly 12 miles. I was a little apprehensive. Not quite sure why but I think maybe because it’s a sort of milestone route in my running journey. The first time we tried I couldn’t do it and had probably my most dramatic running meltdown where I actually had to sit down by the river for a few minutes to stop sobbing. That route has always been a big deal. I was so anxious about it  and wrote about that the day before we tried again. Then we did it.

So the last time I struggled quite a lot. While the route is stunning I struggled to take it in and I added in additional walks and was in quite a lot of pain at the end of the 11 miles that we did that day. So we got to Bolton Abbey and the weather was looking pretty good. It was colder than it has been and I had dressed accordingly but the sun had come out and I wondered whether I was going to be too warm. We used 1 minute run/30 second walk intervals and started, as we did last time, at the top of the first slope. It took a little while to settle in and I’m still having some hay fever issues but it wasn’t too bad. We saw some wagtails and dippers as well as blue tits, great tits and a couple of wrens early on and before I knew it really we’d reached the Strid, made our way up the ‘steps’ and onwards to the aqueduct and then Barden bridge. It started raining.

We crossed Barden bridge, made our way along a footpath alongside a short stretch of road and then into the first of many fields. The route is part of the Dales Way and runs through fields and on paths running at the side fields and the edge of the river Wharfe. For most of it I was just following Kath letting her pick the route through and trying to mimic her bounciness and confidence (fake it until you make it, right?) but in one rare moment of sensible decision making I decided not to follow her through a really boggy bit and changed direction just as she disappeared knee deep into what had vaguely looked like solid ground. For most of the way we kept to the run/walk intervals exactly. There were a couple more technical sections where we picked our way through more carefully and then a set of steep steps which we walked on both the up and down!

The rain was constant now and heavy. At the top of the steps Kath said we should stop because I wasn’t enjoying it. That pissed me off a bit. I was fine and actually not miserable. I was still going pretty well  – I’d just made a comment about remembering these steps from last time, I think I nearly cried when we got to them on the way back last time. We got back on the same page and continued. About a mile later, with the rain whipping in our faces and the wind making it feel really quite cold, we decided to turn back. Being miserable is not part of the running plan!

It instantly felt less wet with the rain coming from behind (well until my rain jacket was soaked through and everything was just sticking to my back). We took a few walk breaks out and made good progress and before we knew it we were at 7 miles. I can’t remember exactly where but in one of the fields we came across a lamb that didn’t look too good. Kath checked it. It was dead – no obvious reason but clearly dead. It felt awful just continuing on. Obviously if there had been anything at all we could have done for it we would have stopped but there was nothing there to even try and revive. We had an extra little walk to pull ourselves together and then carried on lost in our own memories of lambing and lambs.

After a bit of quiet time we refocused on the beauty of our surroundings. It was still raining but there was lots of gorgeousness – watching the swifts/sand martins play over the river and fields for example, the lambs bouncing, the ewes grazing and watching, the different shades of greens, the moor and Simon’s Seat in the distance. If you’re missing photos – sorry it was too wet to even think about getting my phone out. I started to listen more to the river. Somehow it was talkative today. On the out run it had sounded grumpy to me. It was like it was cross with us or the world in general. It was a slightly unnerving noise when I was aware of it anyway. On the way back it didn’t seem like that. It seemed to be roaring us on through the loud sections and the quieter ones were a mix of friendly chatter, calm reflection and happy gurgling.

Kath managed to avoid the bog on the way back and before I knew it we were through 8 miles and back on very familiar territory. I still felt quite strong. The last mile was more of a struggle and I was getting tired. 10 and a quarter miles done today. We got soaked to our knickers but it was good and we did get a mile and a bit at the end without rain to help us dry off a little. By the end my hips were a bit tight and my ankles tired and as the day has gone on my glutes are saying ‘hi’ but it’s all good and I’m really happy with how I managed to keep moving through the muddy puddles and slightly more tricky terrain. So while it wasn’t the 12 mines we had planned it was good and we’re ready for the half marathon on 6th May. I never really feel prepared for races, ever, but I’m not terrified and that is as good as it gets!

I had more tailwind (reviewed here) today and my two little bottles over the distance today were plenty – it wasn’t hot so if it gets hotter I probably need more  – or the same amount in more water. The new order arrived today too and includes some stick packs of their recovery drink to try so I’ll let you know about those once I’ve had chance to test one. 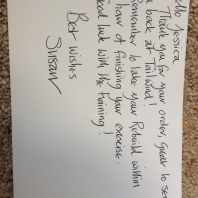 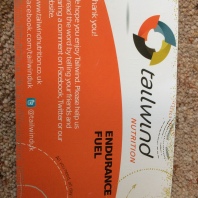 And just for the record: Happiness is dry socks! 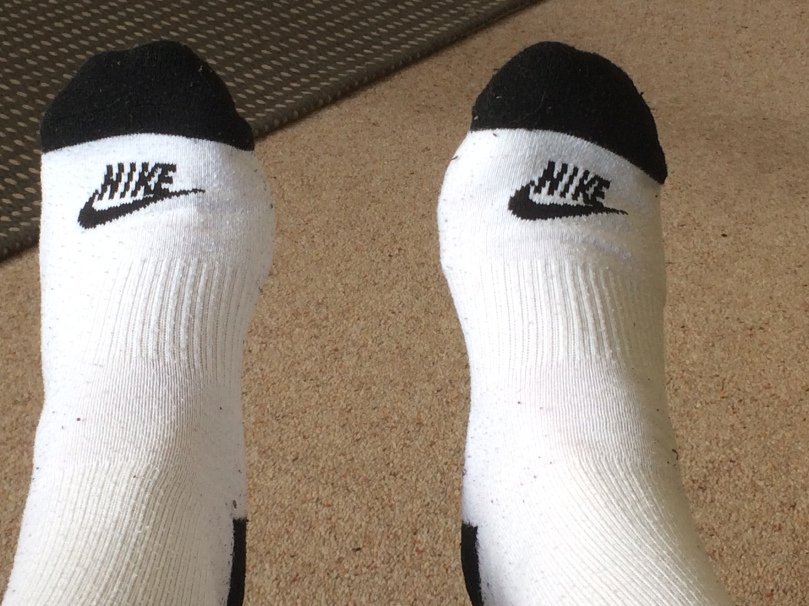