Muscle soreness is always worst on the 2nd day after doing something, right? Well I was

(and sort of still am) feeling pretty good about how I feel 2 days post half marathon. Walking around and just going about our ‘being a tourist’ stuff I can barely tell that I ran a half marathon. I feel good. The plan for today was to head out to Toronto Island and go for a run out there. We checked  online and from one end to the other should be roughly 5km. 5km, well I reckon I can do that. 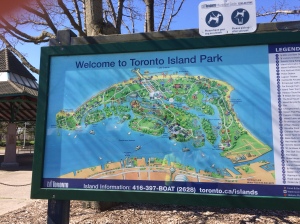 We woke up early again after another pretty disturbed night. We decided we would ask if there was another room available that wasn’t opposite a service door where staff seem to chat and where some work is obviously done at 11pm and around 1.30am. I have no idea what but that’s when the conversations and banging happen. They then start up again around 5am so sleep is not easy. We were told there would be a room available so we packed all our stuff, left it with bell services and headed out. We got the 8am ferry to Hanlan’s point and then ran across the islands all the way to Wards Island ferry port. Oh my goodness. 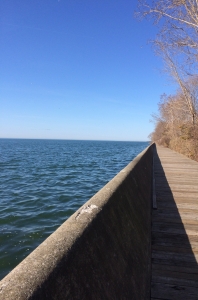 So walking and running use very different muscles or the same ones differently! The minute I started running I realised just how tired and tight my hamstrings were. They
were screaming at me to not be an idiot and just stop moving. Had I not been in such striking surroundings I might have listened. I kept putting one foot in front of the other and with encouragement from Kath made it to the other end. I didn’t dare stop running because I didn’t think I’d get going again if I walked. At the other end we stopped, had a little walk along the lake front on the beach and then realised that the boardwalk that we thought was closed was actually open. It was too tempting. We decided to run at least a short stretch of it. As I started running again, my hamstrings filed for divorce. They did not want anything further to do with this madness. They felt like they had shortened by about 3 inches and just didn’t really fit me any more:

Hamstrings: No we’re not, we’re too short

Me: Nope, you just feel too short

Hamstrings: That’s it, it’s definitely you and not us. You’re just unreasonable. Stop it. 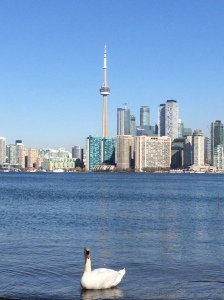 Hamstrings: Hmph. We hate you.

Left calf:I agree with the hamstrings!

Me: Shush, nobody asked you 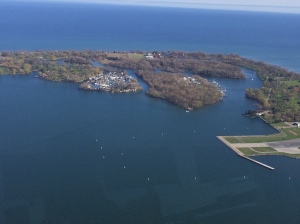 until 11am it seems and even after walking around Centre Island a little it was only about 10am. So we decided to head back, get a coffee and pastry and Queens Quay and then walk to St Lawrence market before going back to the hotel. At the hotel we picked up our new room keys and had our bags sent up to us  – seemed easier. The room initially seemed fine – smaller than the original one and a lot lower down obviously but fine. Then we realised that the air conditioning vent on a lower roof below was rattling badly and banging and even with the window closed was incredibly noisy – we tried again and this time got a room on the 10th floor which seemed fine. We went to retrieve our luggage from the 6th floor room and the key cards didn’t work. We were by now a little irritated with going up and down the hotel’s various lifts. We spoke to a manager and she sorted it and we could get our bags. As a gesture she has given us a voucher for breakfast tomorrow – suppose that’s fair.

Once settled we had a little swim and 10 minutes in the whirlpool. That seems to have made my hamstrings reconsider their position. They seem a little friendlier even after walking to the CN Tower for dinner and back (it was fab) but then I haven’t tried to run so I’ll let you know how my relationship with my hamstrings develops over this week.

One thought on “My hamstrings want a divorce”