It’s about 7pm and I am sprawled on our hotel bed reflecting on the Toronto trip so far. The running part, well rather the official running part, is now over and soon I will have to get my head into work mode – but not yet. I have a couple of days.

Today we ran the TorontoMarathon half marathon. It was great but let’s start at the beginning. We left home Friday morning – we were meant to go for our final little run on Thursday evening but by the time I got home we were both tired so we got up early on Friday instead and went for a little plod. My hay fever was bad so I actually only did about 2 miles but it felt good to stretch the legs. The flight to Heathrow was uneventful, as was the wait at Heathrow – it was just long. As we boarded the flight we were upgraded to World Traveller Plus (that’s British Airway’s version of premium economy)

which was nice because it meant we had a bit more space and it was just us to on a row. The flight was also uneventful. Apparently though things were not so uneventful in Toronto and Ontario generally. Storms and high winds cause lots of damage and power outages and lots of flights were delayed and/or cancelled. The knock on effect was that we spent an hour sitting on the plane on the tarmac while we waited for a place to park at the terminal so we could get off. We abandoned plans of trains to downtown and took a taxi. The hotel lobby was busy and huge and disorientating as we came in but we got checked in and crashed into bed.

Saturday morning we woke up early and after a cuppa in bed (yes I have become that woman who packs Yorkshire tea bags…) headed out to find some breakfast. We walked to the Hilton Hotel where the free shuttle buses to the marathon expo were leaving from and found a Tim Horton’s almost opposite – well when I say found, it’s hard not to find them, they’re everywhere. We had coffee and porridge with maple syrup – which of

course I loved and Kath found too sweet. Then we waited for the bus for a little while –  they were using the classic yellow north american school buses which was kinda fun. The expo was my sort of expo – small and manageable and not too busy. It was also well organised so we got our race numbers, activated the timing chip, picked up our t-shirts (I have issues with race t-shirt manufacturers. I ordered a women’s large t-shirt. Their definition of large and mine are different. It’s so tight I don’t think I need a bra! Unfortunately they couldn’t swap shirts so it’ll go into the ‘wear underneath stuff if it’s really cold or wait for a miracle’ pile). Then we thought we’d just have a quick look around. A good hour or so later and with our wallets a good bit lighter we left and got a shuttle back. Back at the hotel we rested and I dozed off a bit I think. Then we met our friend Heather

and her family for dinner at the Old Spaghetti Factory which was really fun. The food was good too and I decided I would once again run a half on lasagne! That worked for me before so it should work again. Back at the hotel we got all our kits sorted and bag packed and got an early night. I slept really well until about 1am. After that not so much and at about 4.30 am we gave up really. We had a cup of tea and a porridge pot, I made up our tailwind drinks bottles, did a final check on our bag and got dressed.

6am we left the hotel. The shuttle bus to the start left from the Hilton again and we just got on one as we arrived and were off. Nerves finally set in during the drive across and I suddenly started worrying about everything. Once there we found some loos and had a little wander round. We ended up sitting in the foyer to the Douglas Snow Aquatic Centre for most of our wait and chatting to a lovely lady called Patricia. She took this photo of us and another lady we were talking to before we headed out to the start line.

I loved the low key approach of this event. There was no over enthusiastic calling to the start line. We didn’t have to spend ages in the start area. About 10 minutes before we set

off we wondered out, found the area where we were meant to start  – it was all based on an honour system of course so the elites were at the front and then it was by time so anyone over 2 hours was at the back. We saw a 2 hours 30 pacer and lined up a little way behind him. Then, just like that and without any fuss or drama we were off. We ran the first bit without walk breaks as always. I think we took 3 or 4 out and then dropped into 2 minute runs/30 seconds walk. The course is described as flat or downhill. That’s not entirely true – there is a hill and there are a few slopes but I think it is probably considered a fast course and that makes sense. 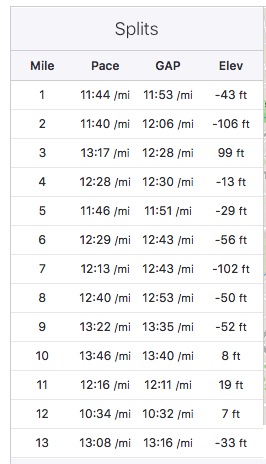 I took a fair few walk breaks out on downhill sections and I went strong to over half way. I had a wobble for miles 9 and 10 where I suddenly panicked about the distance and being in unchartered territory – which is nonsense because it’s not unchartered, I’ve done this a few times now, and because I felt physically fine! I think it was just the knowledge that at the last attempt over this distance I was physically gone by 9 miles and pulled out at 10. I got going again for mile 11 and I’m not sure what happened for mile 12 – fasted mile of the day and much faster than I usually run even on short distances! In the final mile my right hip flexor was making itself known and my calves were getting a bit crampy and I was also really emotional. I was actually going to finish a half marathon! And that I did. Chip time 2 hours 48 minutes 40 seconds. That’s 7 minutes and 9 seconds off my previous best. Sub 2.45 I’m coming for ya! 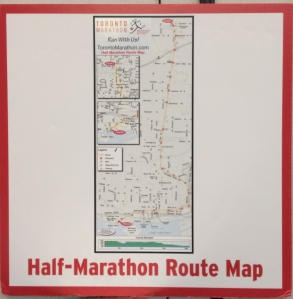 The course is basically  a north to south route and for much of it you can keep your eyes on the CN Tower (picture below taken from shuttle pick up point rather than actually on the run). I missed it when I couldn’t see it! It’s obviously a city run and whether you find the route interesting or not rather depends on what you find interesting. I liked running through different areas of Toronto – starting with what seemed like a pretty wealthy neighbourhood with family houses rather than high rises. I also kept chuckling because the streets are soooooooooooo long. We spent a long time running along Yonge Street for example which would have taken us all the way downtown. We turned off eventually though and went through an area which seemed to have wooded areas on either side of the road before turning again and heading towards the CN Tower again and then past it and the Rogers Centre where the Toronto Blue Jays play. With around 1km to go we saw Patricia again. She’d finished and was walking home but stopped to cheer us on and take a couple of pictures. I was struggling now so it was a great boost to see her. 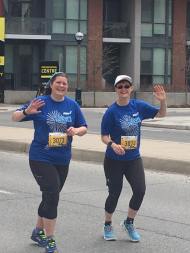 After crossing the finish line we collected our bag, sat down and had our tailwind recovery drinks (chocolate apparently ok, vanilla tastes marginally better than it smells – which is awful), pulled our tracksuit bottoms and long sleeved tops on and then went and collected some honey water and an apple (there were bananas too but they looked very green still and there was some bread like thing which neither of us liked the look of). Then we went to a fenced off area to pick up our Moosehead Brewery can of Cracked Canoe  – we didn’t actually manage a full can each. I don’t know how people can drink alcohol immediately after running. 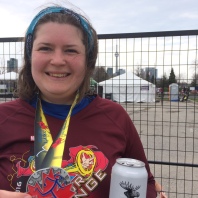 Coach Kath – she was fab! 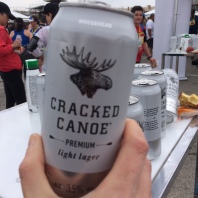 Great name for a beer

Not All Ours, Honest!

The organisation of the race was really good and the marshals and police looking after the junctions were fantastic. They were so good at reading the traffic, the pedestrian crossings and the runners to make everything very smooth. We saw one altercation between a cop and a motorist. The cop had told him to stop which the driver had misinterpreted as a wave for him to come through and he nearly ran the cop over as a result. He was still arguing with the cop long after we’d passed them and eventually their voices faded into the distance. All the staff and volunteers, from bus drivers to water stations to finish area via marshals and everyone else, were just fab. Thank you.

We found the shuttle bus stop and headed back to the

hotel. From the Hilton we walked a route that would take us past some food options and in the end we opted for a salad box, crisps and a grilled veggie sarnie from a little market. We had that in our room, had a bath and rested a little while. Then we decided we would need some proper food.

pretty much opposite our hotel. It seemed a bit odd going to a British themed pub but it was convenient and the bar menu looked good. We both had burger and chips – classic post-race food for us – and a beer and then were pretty much in danger of falling asleep there and then.

We have no further plans today! My half marathon demons have been put to rest. It’s once again my favourite distance  – it challenges me on all sorts of levels but it doesn’t break me. It’s been a good day. Night night!

3 thoughts on “Toronto Half Marathon”